I was the keynote speaker at an economic dialogue on Nigeria organised by Konrad Adenauer Stiftung (KAS) and the Delegation of German Industry and Commerce in Nigeria (AHK) on 23 May 2019. Titled “Road to Economic Development: Challenges and Opportunities”, the dialogue was aimed at shaping the priorities of the incoming second administration of President Muhammadu Buhari. The following is the 2nd part of my speech. I also include some of the points raised by other participants. 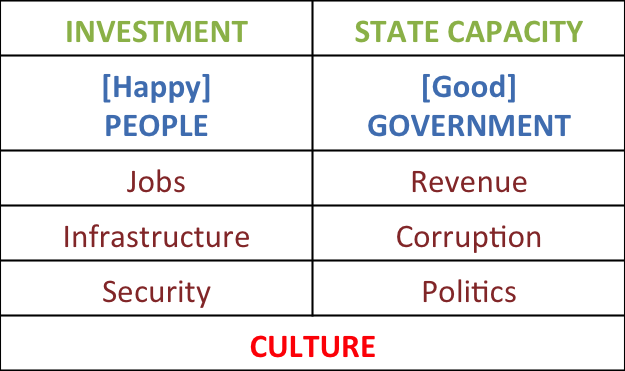 On the panel at the KAS economic dialogue, security was the number one priority for Dr Obadiah Mailafia, a presidential candidate in the 2019 elections. He related a story of the harrowing experience of a relative of his in violent clashes in his area of the north to justify this. Dr Mailafia also asserted the need for every Nigerian to be registered with the authorities. In other words, every Nigerian should have a national identity card.

For Olaf Schmuser of Commerzbank, the government spend on debt servicing was a major source of concern. In addition to highlighting the need to address the problem of power shortages, her forte, Onyeche Tifase of Siemens asserted the need to develop the country’s human capital; especially in light of our increasingly digitalised world and how information technology has democratised access, thus allowing Nigerians and indeed other Africans to be active participants. The cultural constraint on development was also an issue that resonated with her; albeit she reckons a shift in mindset towards one of excellence in our part of the world is inevitable.

To achieve the things that would make the people happy, that is, jobs, infrastructure and security, a country must be able to attract investment. And for the state to do its part to bring this about, it must have the capacity to do so. Simply put, the two things needed to make the people happy and the government good, are investment and state capacity.

Underpinning whether all these would be achieved in Nigeria, or in fact any other country, however, is culture. Incidentally, the culture of Germany, the sponsoring country of the economic dialogue, is an excellent example of how a society’s culture is germane to development.

Germany has a culture of excellence, precision and persistence. Such is its culture’s knack for precision that there are no two words in the German language for anything, one Nigerian employee of its consulate in Lagos tells me at the dialogue. Unfortunately, our culture cannot be similarly praised in regard of these values. And because culture is the foundation of everything else, which I show in my matrix by putting it at the bottom, it can be attributed for why Nigeria continues to flounder.

In fact, I am convinced that the ongoing exodus of middle-class Nigerians to Canada and elsewhere abroad, is motivated not only by a desire for a better education for their children, but also to inoculate them against some of our bad cultural practices. True, they do not entirely escape it even while abroad. But they are better able to make informed choices with relatively little or no costs.

That said, what is to be done in the immediate term?

This site uses Akismet to reduce spam. Learn how your comment data is processed.